Government agencies and enterprises have been performing business process improvements for the past several years to improve efficiency within their internal processes, reduce waste in internal workflows and streamline business functions. This has led to human workers performing tasks more efficiently. However, this consequently has led to humans performing high volumes of repetitive, mundane tasks leading to burn-out and increasing risks for human error.

Today, advances in technology have enabled the automation of human tasks, especially those that are repetitive and mundane, as well as those that involve a certain level of cognitive functionality (i.e., “decision-making”). This has enabled government agencies and enterprises to enter the next level of creating efficiency by automating functions using methods ranging from simple workflow automation to complex intelligent process automation (IPA). For instance, IPA holds the promising potential to expand automation capabilities to include additional and more complex workflows and functions that utilize both structured and unstructured data. IPA combines Cognitive/Artificial Intelligence (AI) and Robotic Process Automation (RPA). The AI provides the intelligence (i.e., the “brains”) of the process while RPA provides the processing (hands) of functional workflows. RPA, which is fundamentally rule-based with limited capabilities, enables IPA to yield high returns and better business outcomes for processes that involve well-defined rules, are repetitive, require access to multiple systems, have manual steps following Standard Operating Procedures, and have a high possibility for human error. 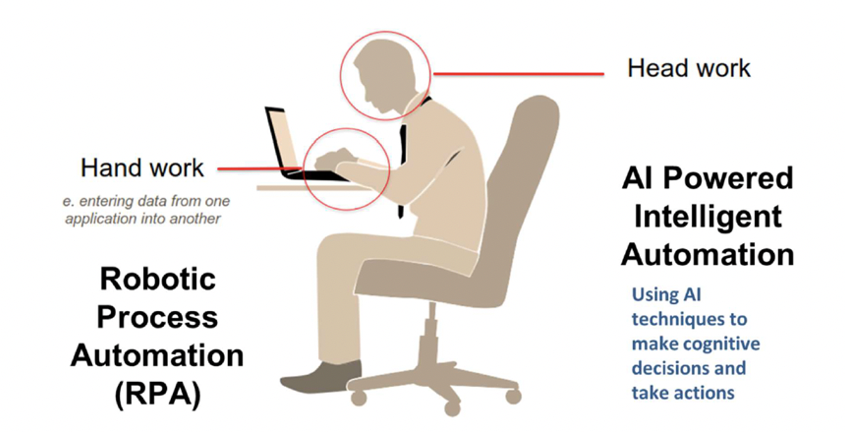 However, currently, most government agencies and enterprises are solely just implementing RPA- based automation in an attempt to improve workflows and functions that typically require less cognitive decision-making steps, but are only witnessing moderate success. The low-hanging fruit for intelligent automation is data-intensive and repetitive tasks that machines can do better and faster than humans. Many applications will keep a “human in the loop”—at least until the system has proven its reliability. Even then, AI systems by their nature learn (both in supervised and unsupervised ways) and therefore change, so they need to be reviewed on an ongoing basis to ensure they are still performing as intended.

Due to these limitations, this has led to more adoption of IPA-based solutions across agencies and enterprises which has dramatically improved organizational efficiency, reduce costs, and increase customer satisfaction levels. AI-enhanced automation can significantly expand the scope of process automation to new and exciting areas that were previously considered too complex for consideration. For instance, a primary objective of IPA is to provide the human workforce with additional knowledge, support, and insights by automating repetitive, manually-intensive, and otherwise mundane tasks. With IPA, organizations can amplify human potential and move employees from low-value work to high-value work. As an example, Abeyon is employing IPA to “read” and analyze voluminous quantities of unstructured documents to extract datasets and utilize them for further analysis.

For agencies and enterprises to adopt IPA into their businesses, a well thought-out long-term plan is needed since the ROI on IPA work will take longer than simple automation. Since AI models will need large sets of datasets to be trained on, a large initial investment will be needed to see long-term value. This involves creating a very clear picture of the cost and benefits of IPA efforts. Abeyon has worked with several government agencies and enterprises to realize the power of AI and how IPA can greatly increase value of automation.

Contact us at [email protected] if you are interested in learning more. Want to learn more about AI concepts? Click here to see our Insights series